Potential use of probiotics and micro/macro algae as additives and major ingredients in aquafeeds. 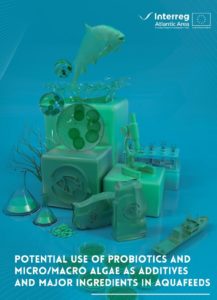 In the last few years, the aquaculture sector has experienced an unprecedented growth, currently being one of the most important activities in the global food context.

In only a few decades, it has become a great supplier of marine animal protein, meeting at least half of the market’s needs. The dynamic path of the aquaculture sector towards its current state has not been simple, as multiple difficulties have been faced and some of them still remain. Some problems are followed by others and, as with any other sector, it will have to face future uncertainty related to climate change and the availability of raw materials to feed the farmed species.

The quick growth experienced has been possible thanks to the improvement of several aspects that contribute to its efficiency. One of them is the implementation of intensive farming techniques, although they have also caused additional problems such as exposing fish to stress and illnesses. These techniques are precisely one of the greatest limitations to the development of the sector, as they basically consist of using antibiotics and other prophylactic agents. Their use is subject to increasingly greater restrictions, and they have additional environmental effects.

The quality of the diet and a correct ecological management are important pillars for aquaculture; thus, over a decade ago and in order to move towards greater sustainability, the FAO and international experts promoted the Ecosystem Approach to Aquaculture (EAA). The aim of this approach was to promote a responsible aquaculture including environmental and social criteria which is, undoubtedly, the main objective for this activity in the short-term. This requirement forces the creation and maintenance of favorable environments, promoting the search for acceptable solutions to naturally optimize production while being environmentally responsible.

Reducing dependency on raw materials of marine origin as a source to prepare feed, partly replacing them by raw materials of vegetable and animal origin, has been one of the achievements in recent years that has gradually contributed to reducing pressures on certain fisheries, improving their sustainability. However, organisms of marine origin, caught under controlled and renewable conditions, provide some of the solutions that aquaculture needs to be able to evolve under the ecosystem approach promoted by the FAO.

As for macroalgae and microalgae, different species have shown clear potential as nutrient sources and bioactive compounds with beneficial effects on the growth, immunological status, or oxidative metabolism of farmed organisms. On the otherhand, different bacteria of marine origin are currently a source of interest due to their capacity to naturally improve the health status of diverse fish and crustacean species when administered as probiotics, thus significantly reducing the need to use drugs and antibiotics. The characteristics and potential applications of both groups of organisms in the aquaculture field are currently evaluated by a substantial number of research groups and companies, the basis of any company’s economic development, including aquaculture. However, the specific problems that affect companies regarding innovation are not always known by research groups and, similarly, companies are usually unaware of the lines of work and results of research groups, so the bilateral transfer is not strong or constant enough to get the most out of the acquired knowledge. This clearly results in a slower industrial development and the lack of efficiency while implementing new concepts to which material and human resources have been allocated.

Under this premise, the Centro Tecnológico del Mar-Fundación CETMAR held in its headquarters, between 2018 and 2019, two monographic workshops for the exchange of ideas and point of views between companies representing the aquaculture sector, along different links of the value chain, and known researchers that carry out their mission along different complementary lines. The titles of the workshops were, respectively, Probiotics of Marine Origin Applied to Aquaculture and Microalgae as a Source of Bio-based Products and Nutritional Ingredients in Aquaculture. As a result of these events, the idea of editing this book to summarize all the aspects analyzed and debated was born, with the purpose of maximizing the use and dissemination of the information presented in the workshops. The participants found the book to be an excellent opportunity to summarize and compile in one document all the approaches that companies and research groups jointly identified as fundamental within the two subject matters discussed in the workshops. Based on this idea, several participants joined the publication, writing a specific chapter about one of the topics discussed.

The book is therefore divided into three parts: a general introduction, and two sections that cover, respectively, the applications of micro/macroalgae and probiotics. The introduction includes two chapters that help establish the context to understand the applications of the organisms indicated. The first chapter details the diversity of ingredients used to make feed for aquaculture, as well as the supply issues regarding fish meal and fish oil. The second chapter includes a summarized perspective of the great diversity of bio-based products obtained from different marine organisms, highlighting both their nutritional and therapeutic applications, with the latter being mostly shown in humans.

The next section details different applications of micro and macroalgae in aquaculture.

Thus, two chapters address different aspects of the use of said organisms as nutritional ingredients for feed, whereas the third chapter addresses specifically the use of the lipids present in microalgae, both from the nutritional and functional perspective. The subsequent chapter addresses an aspect of great interest: the application of genetic engineering techniques on microalgae with the purpose of modifying their suitability for farming and their chemical composition. The last chapter of this section focuses on applied aspects and provides information regarding the practical conditions of microalgae farming in photobioreactors and the way in which they influence the performance and content of the nutrients of said organisms.

The third section of the book, on the use of probiotics in aquaculture, includes three chapters. The first chapter provides a general review of the diversity of marine bacteria with probiotic potential. The second provides a practical explanation of the same topic, the techniques used for the isolation of those organisms, and their biological evaluation. The last chapter describes different protection and transport means used for an efficient oral dosage of probiotic microorganisms and bioactive compounds obtained from algae.

This book could have never come to fruition without the uninterested collaboration of the great number of professionals mentioned above and our efforts would not have been successful without their generous contribution. We are indebted to all those who have shaped and added content to the text. We take this opportunity to thank all of you for your altruistic effort and commitment. Please, accept our gratitude and acknowledgement.